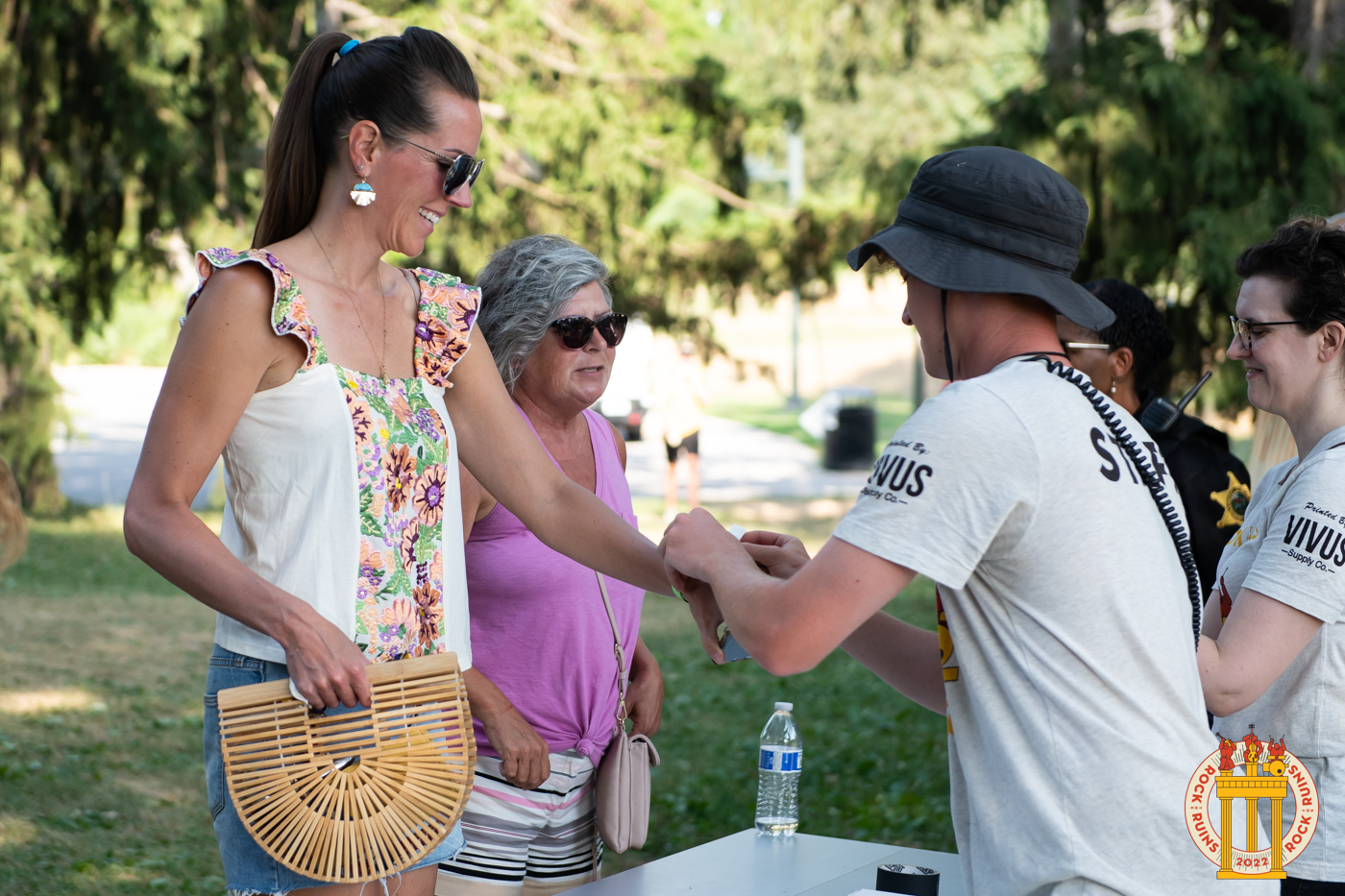 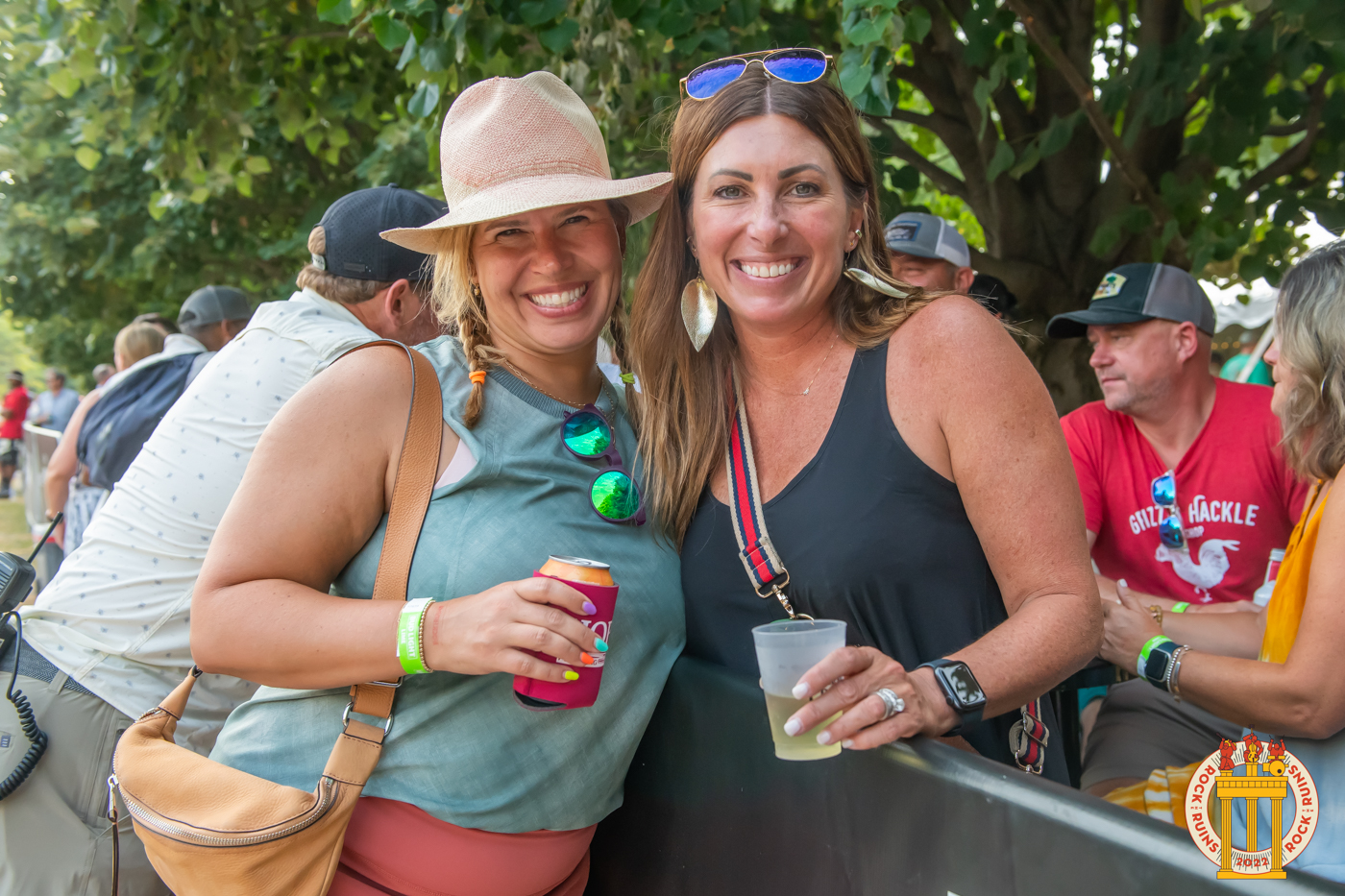 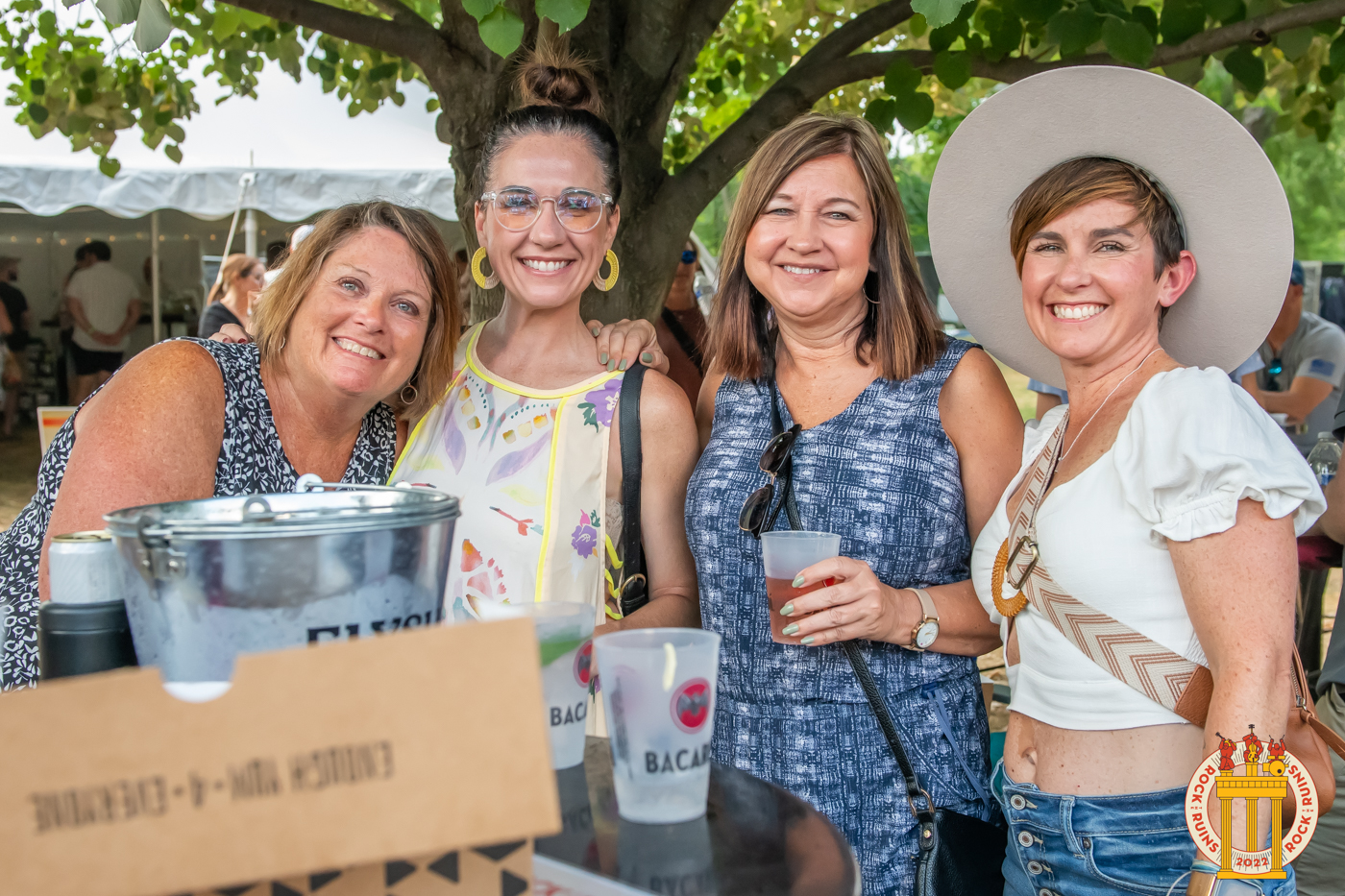 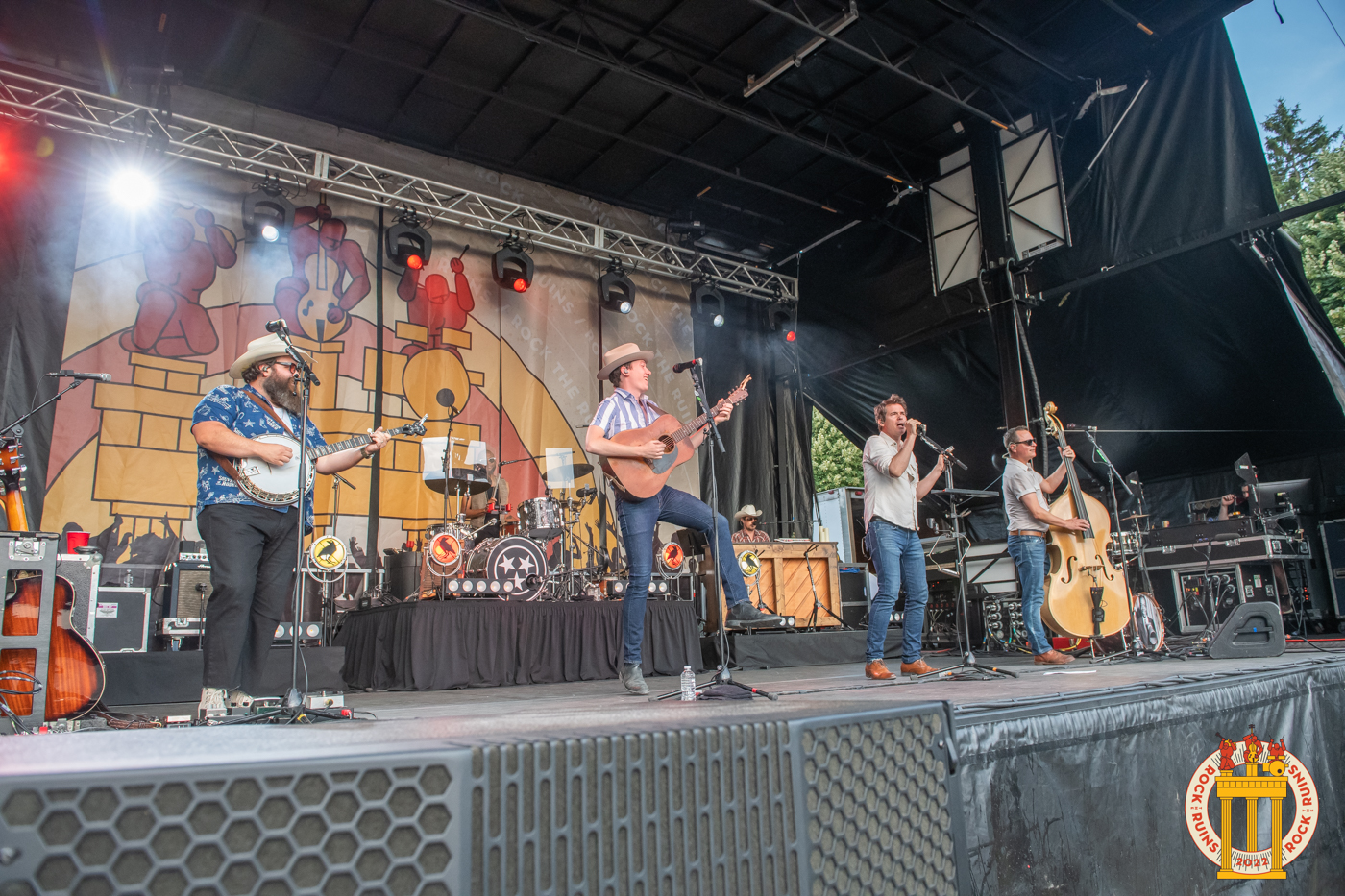 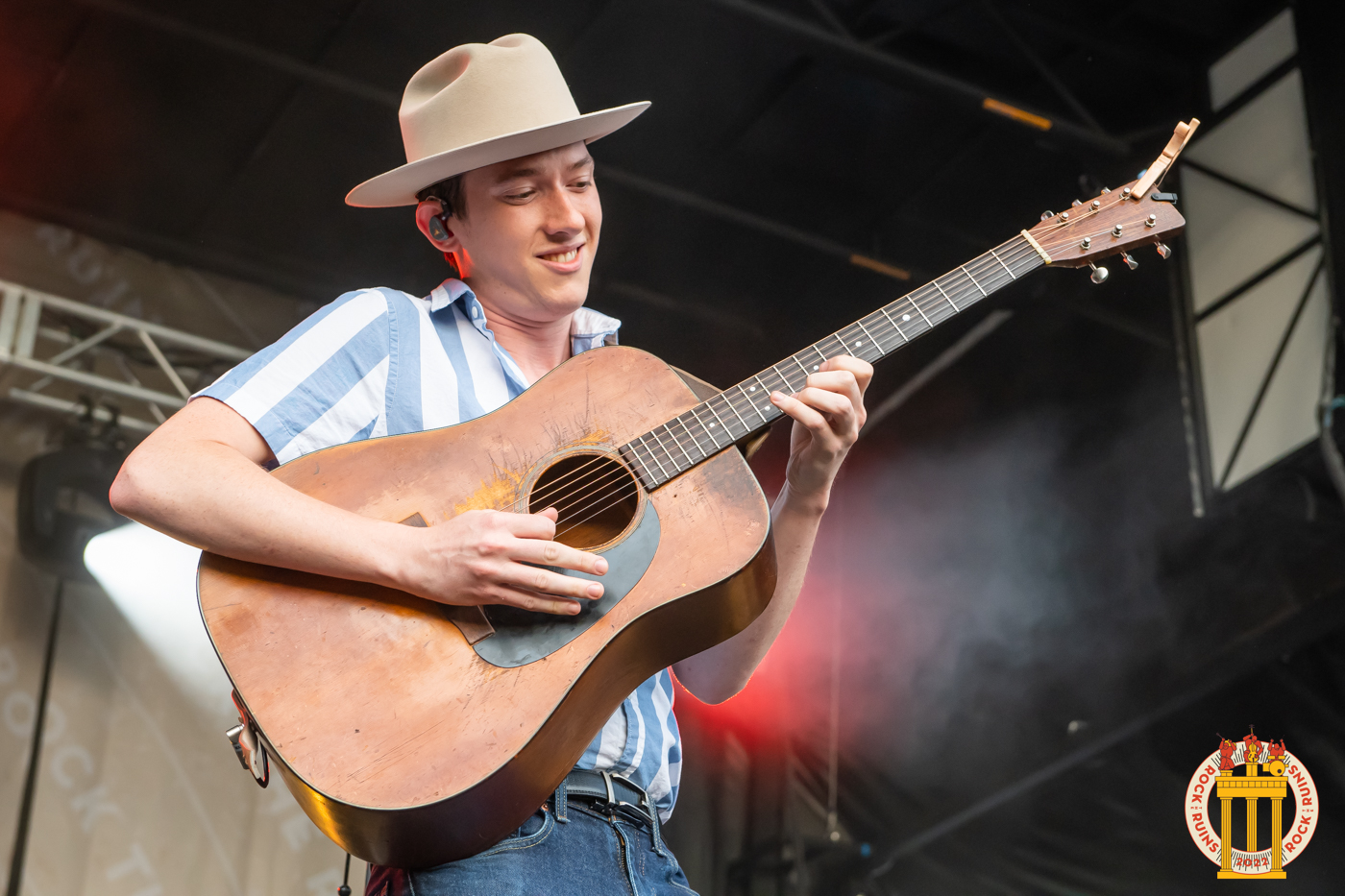 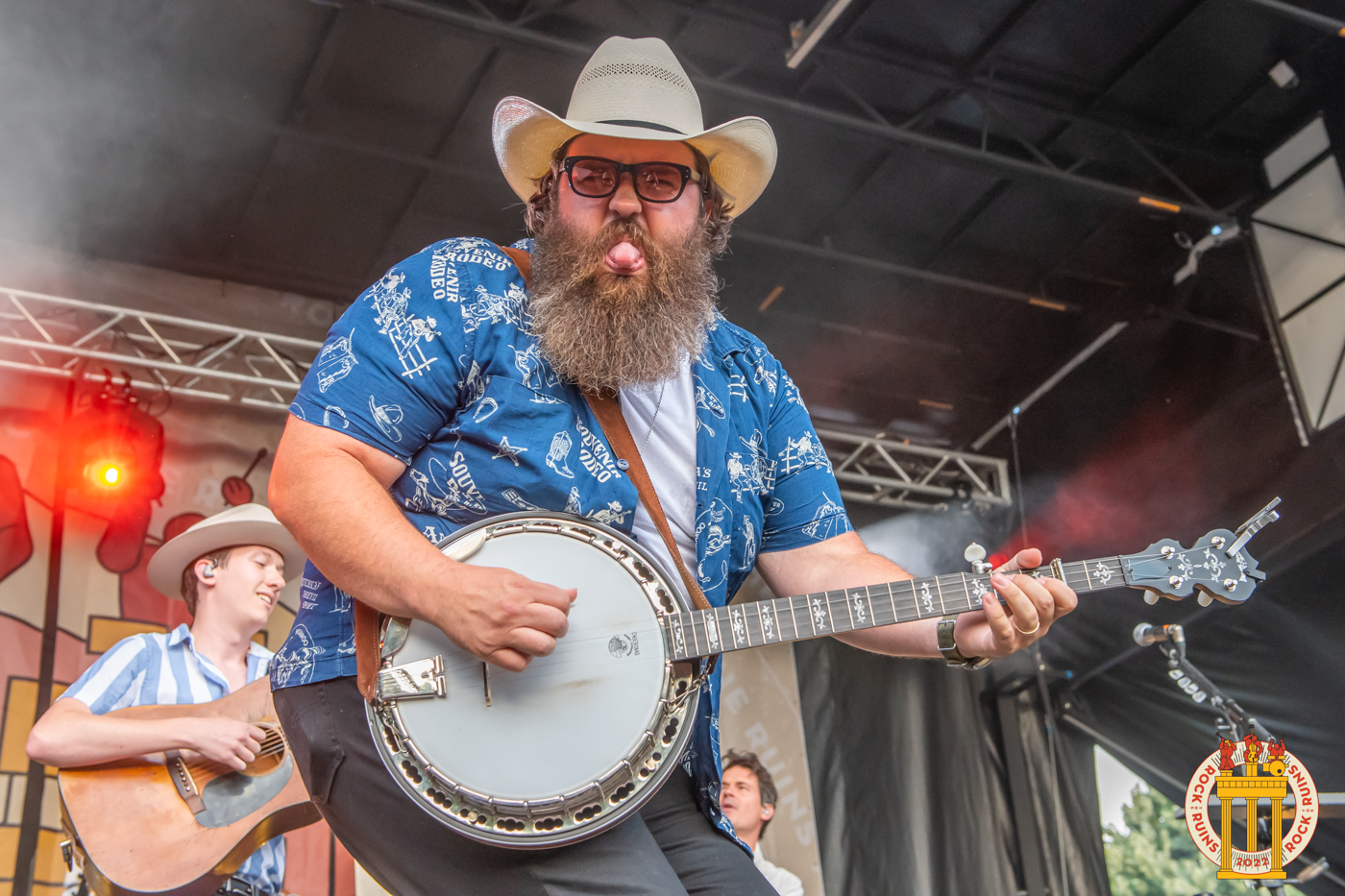 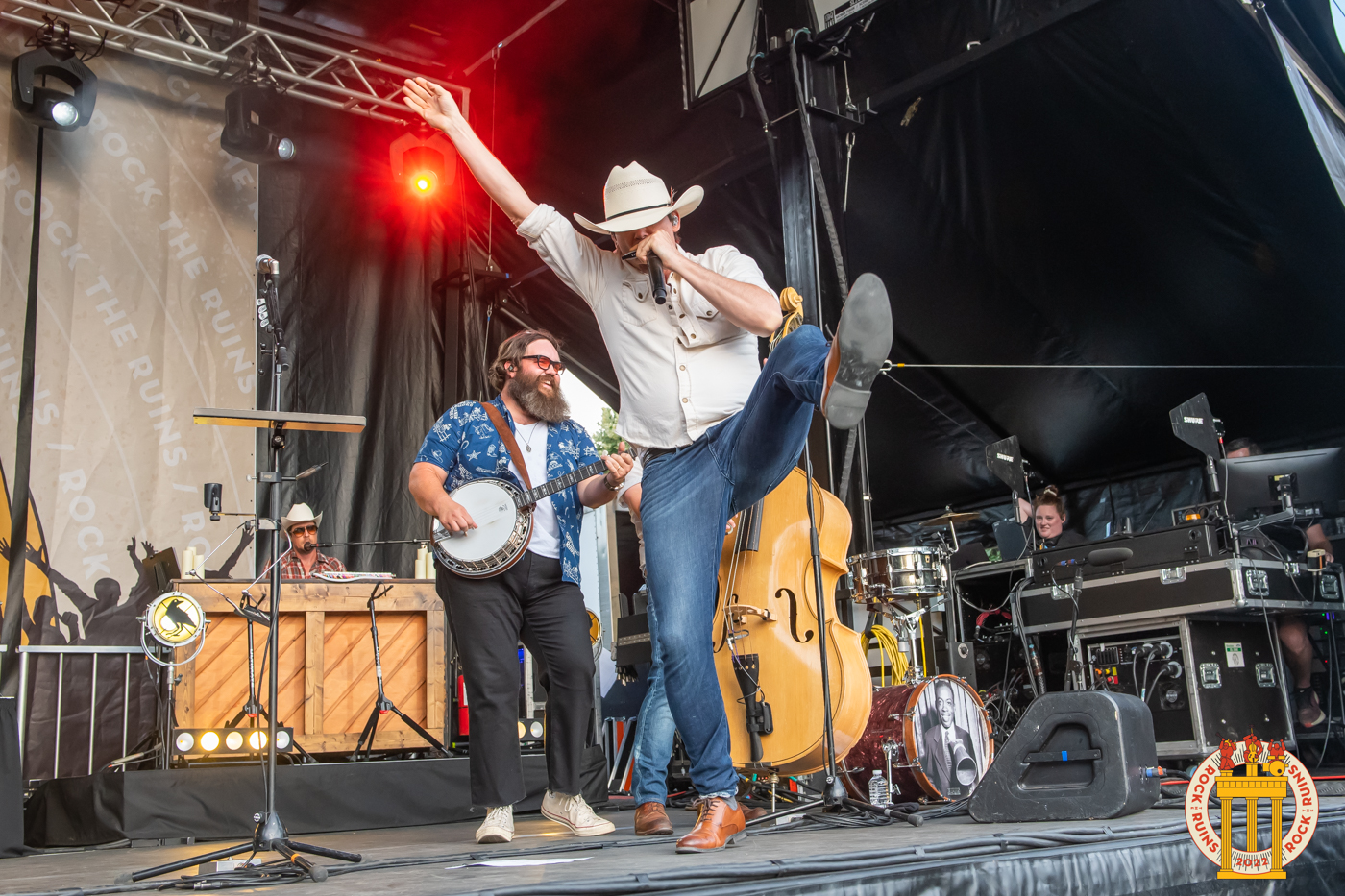 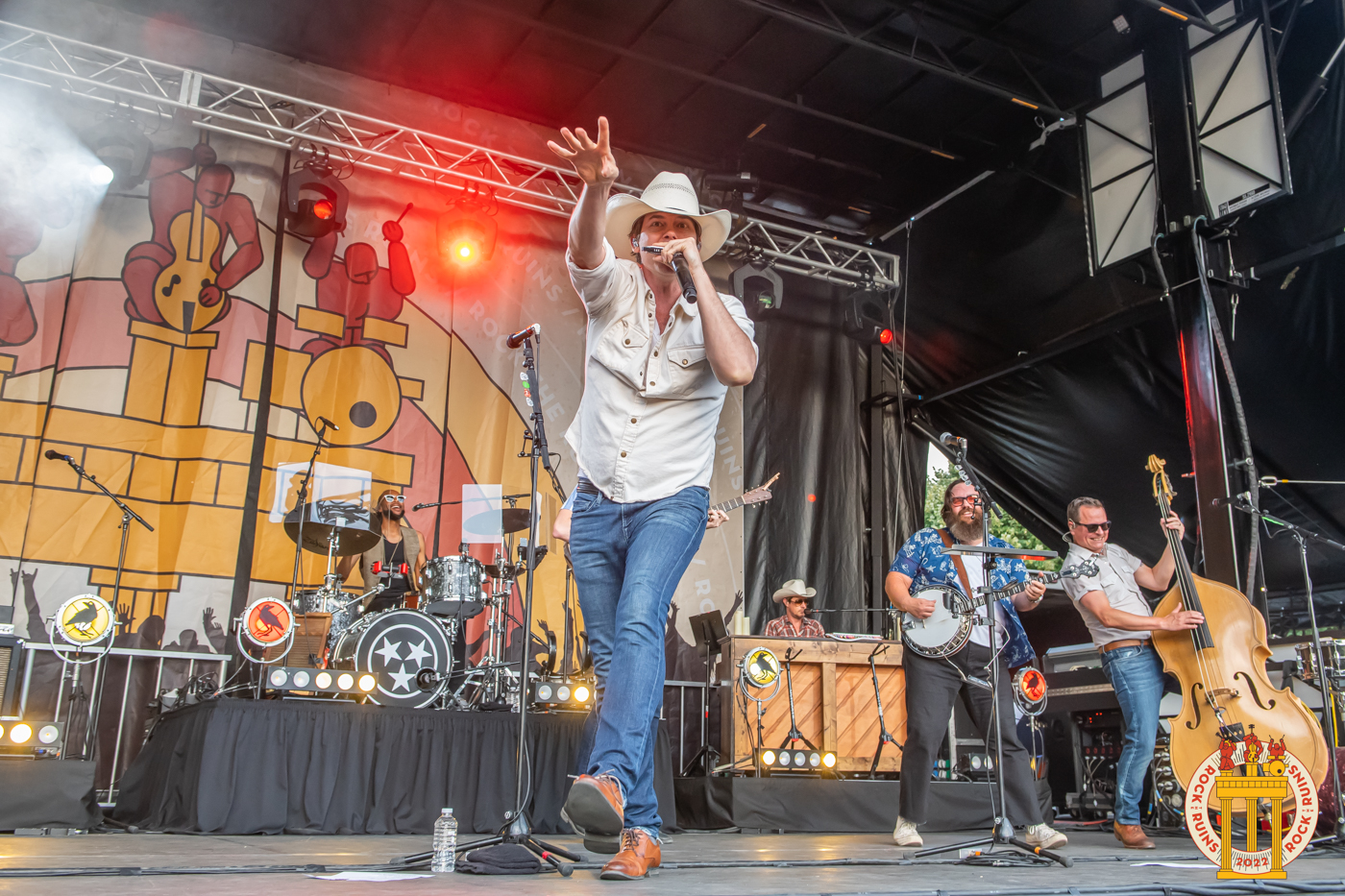 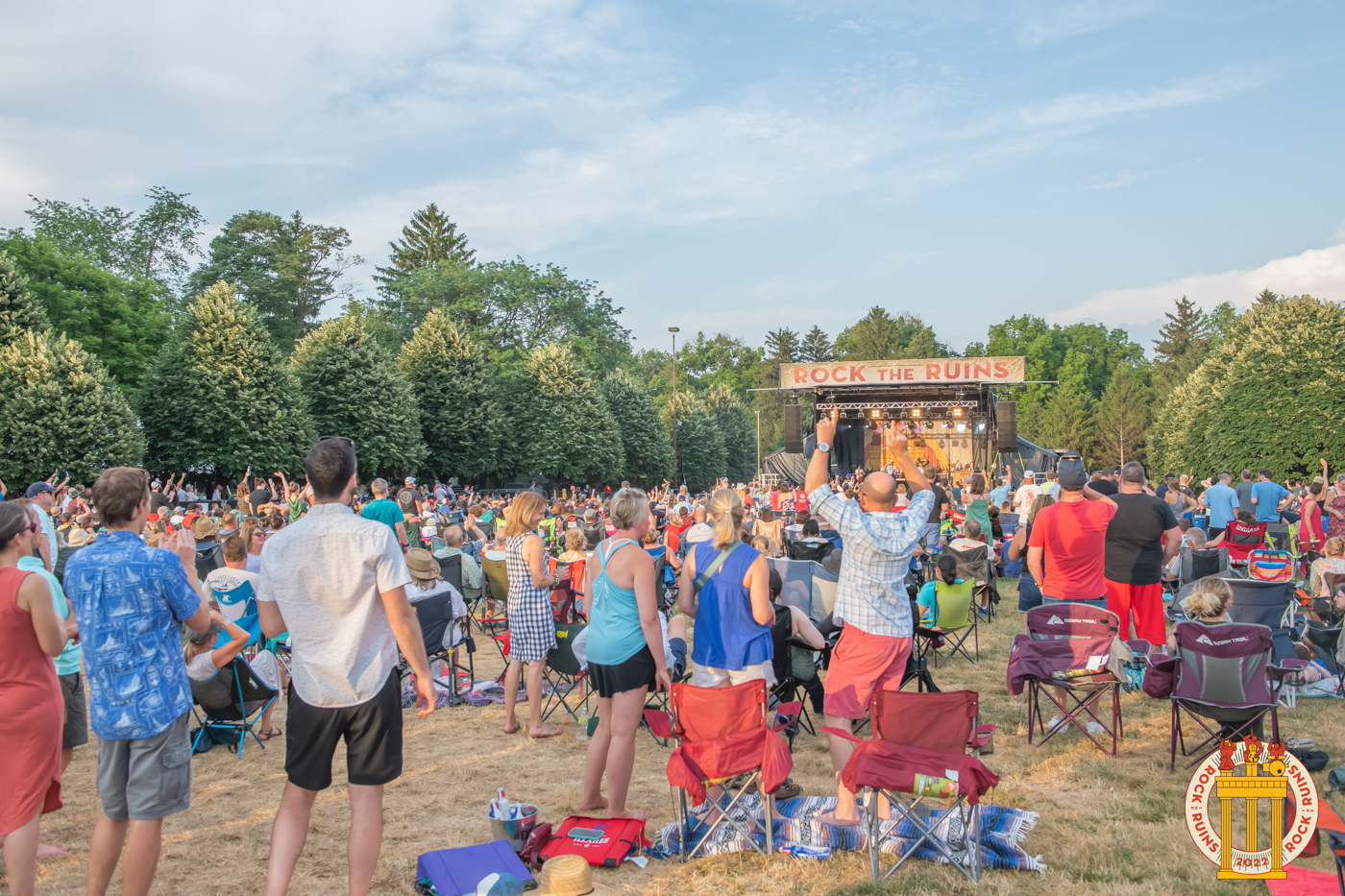 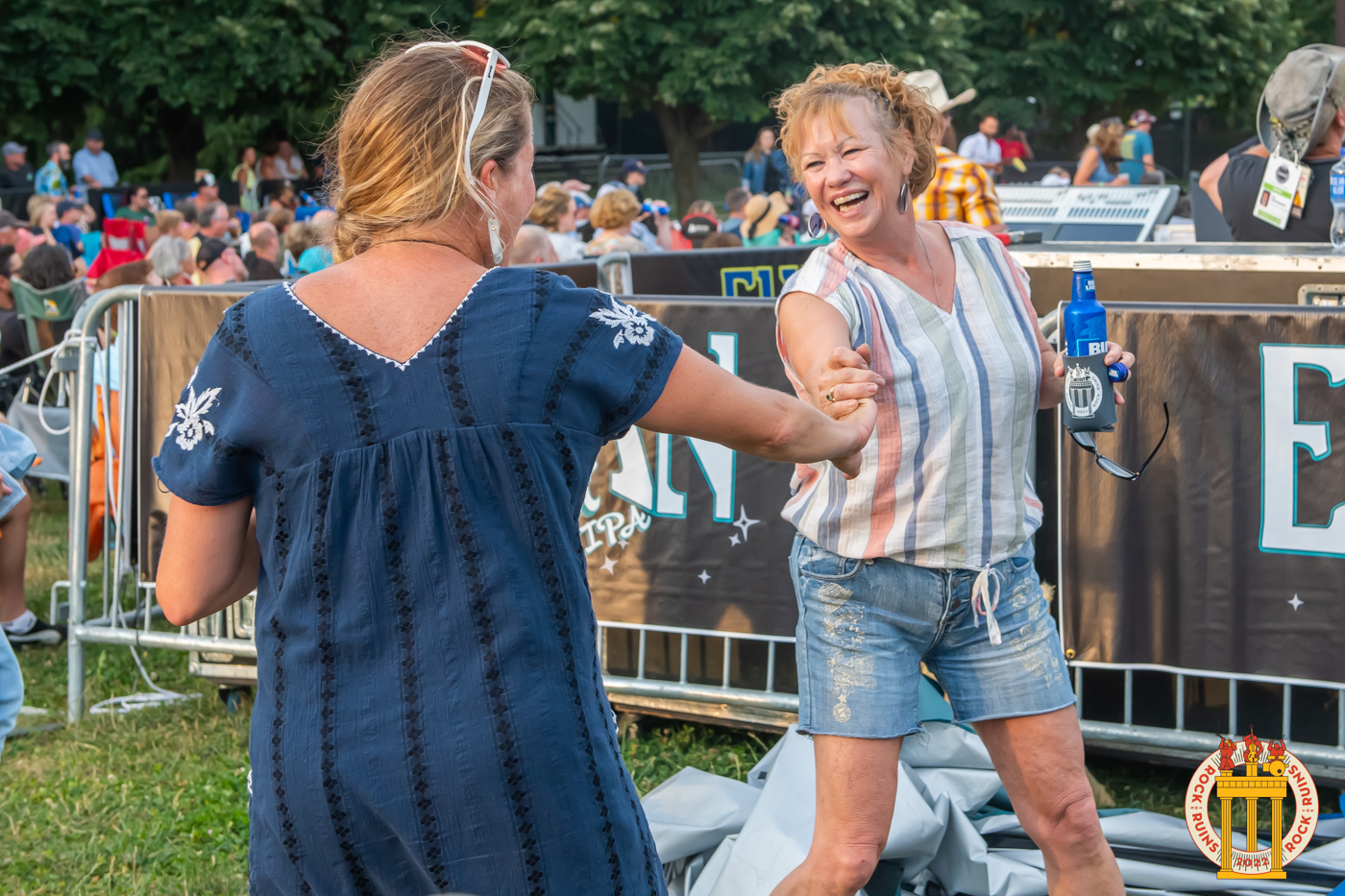 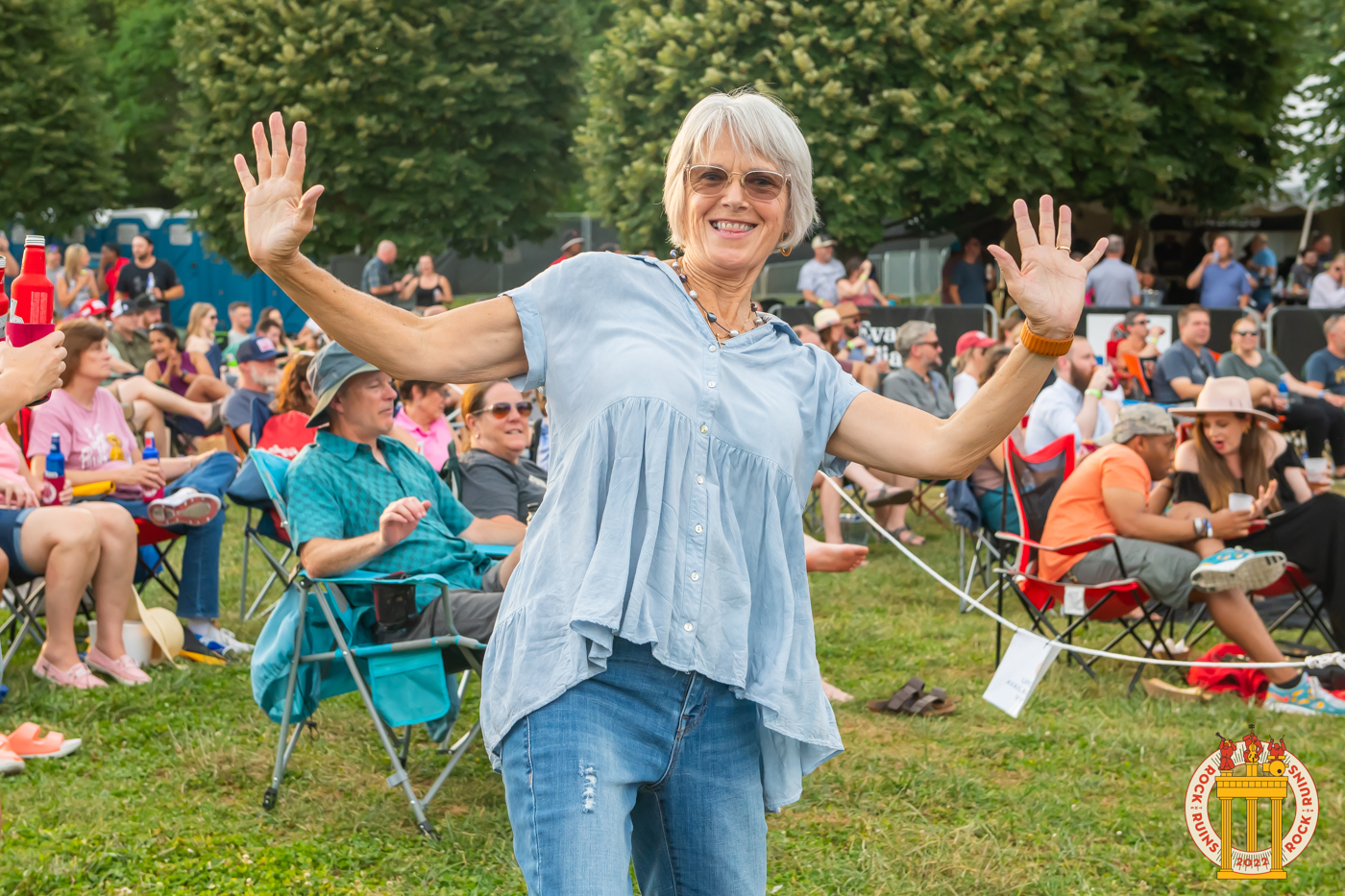 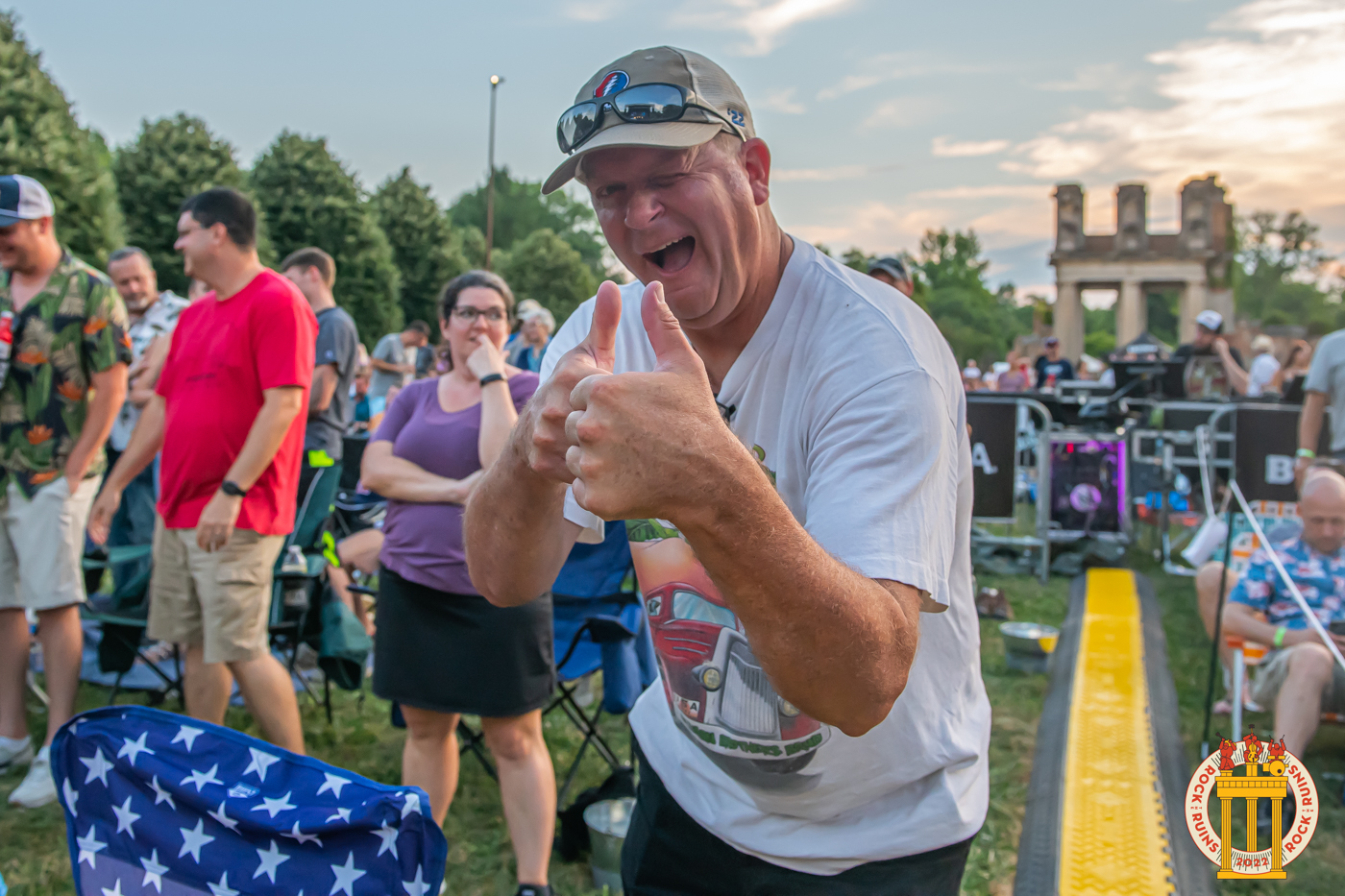 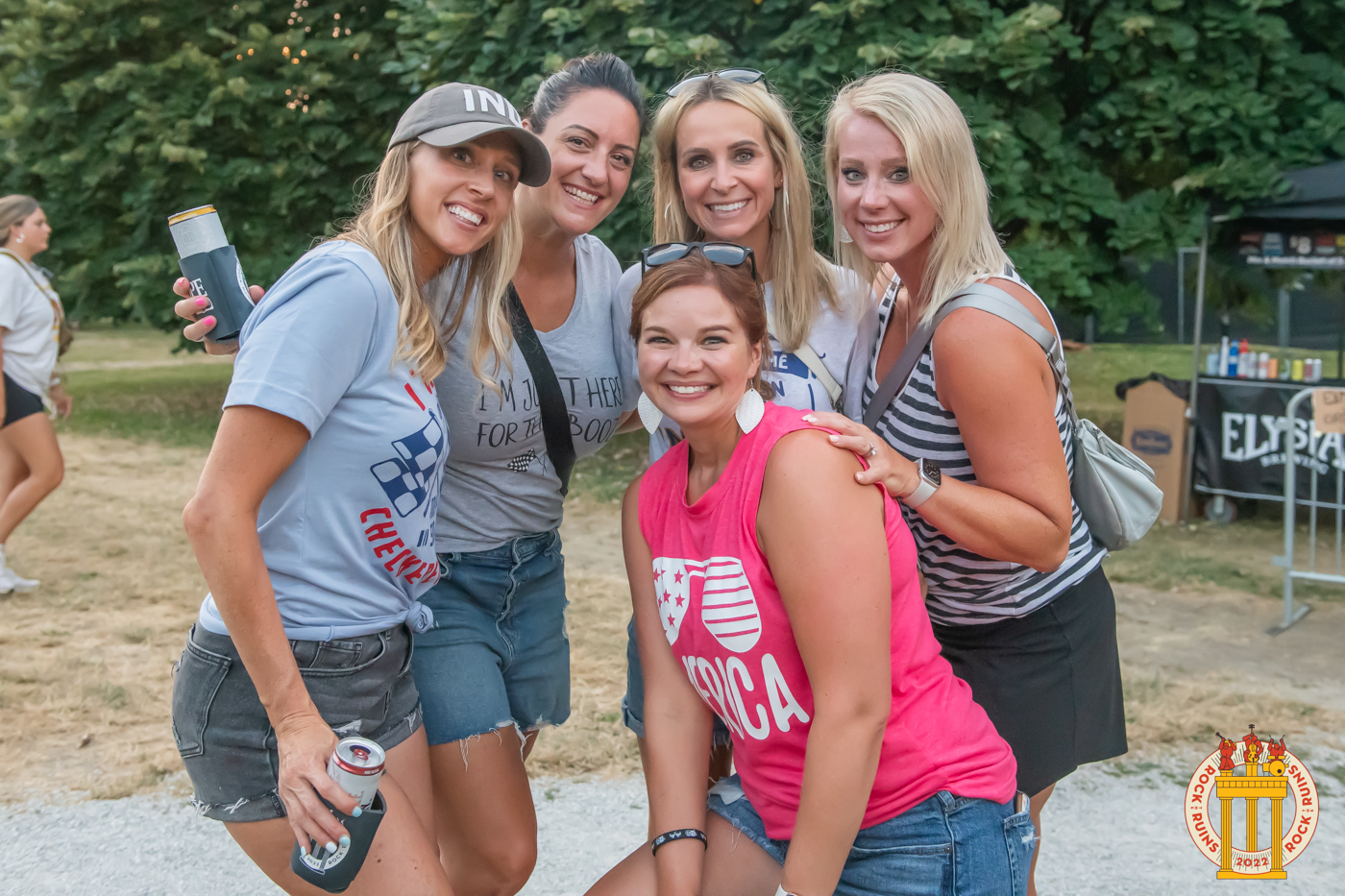 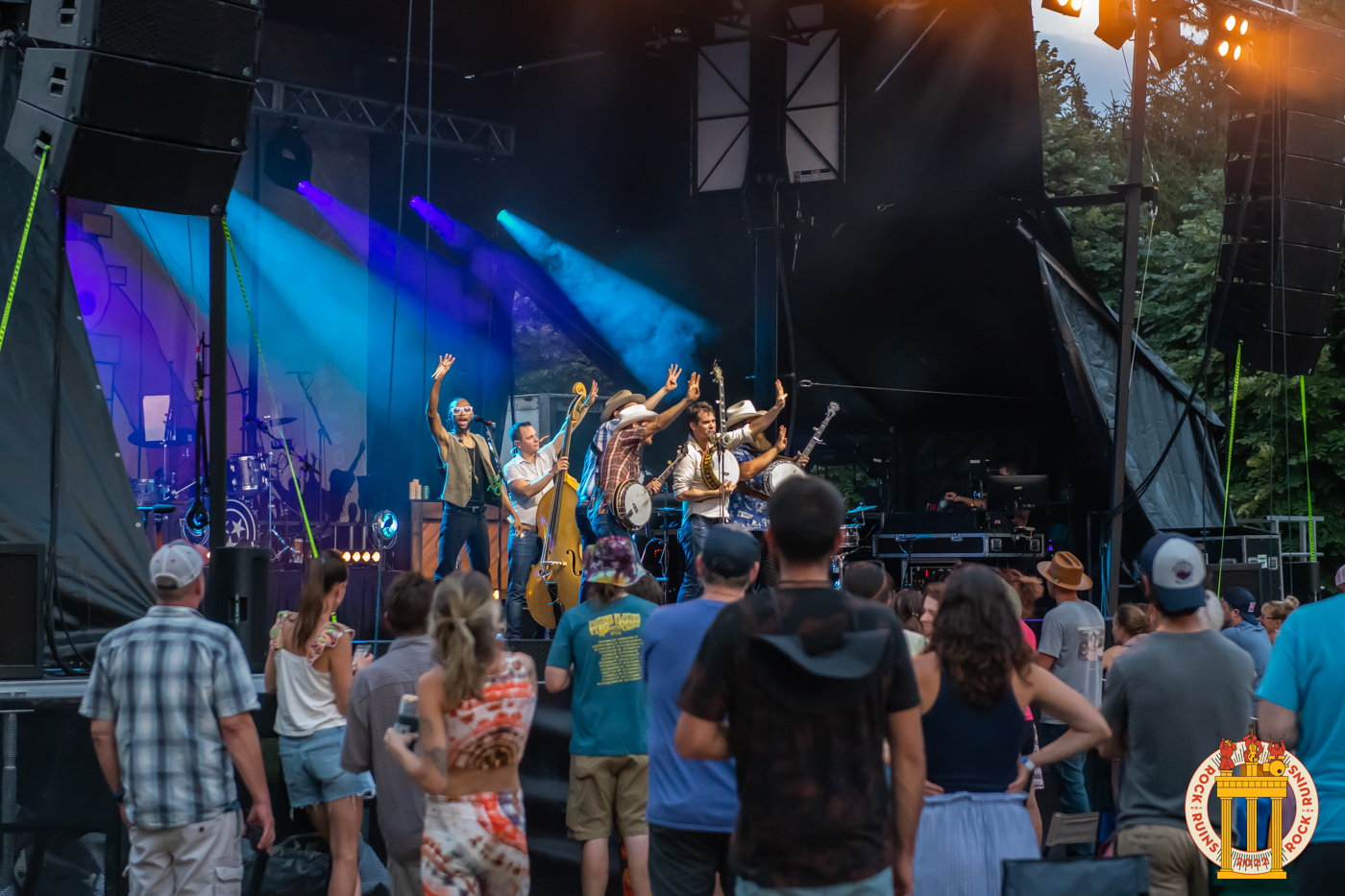 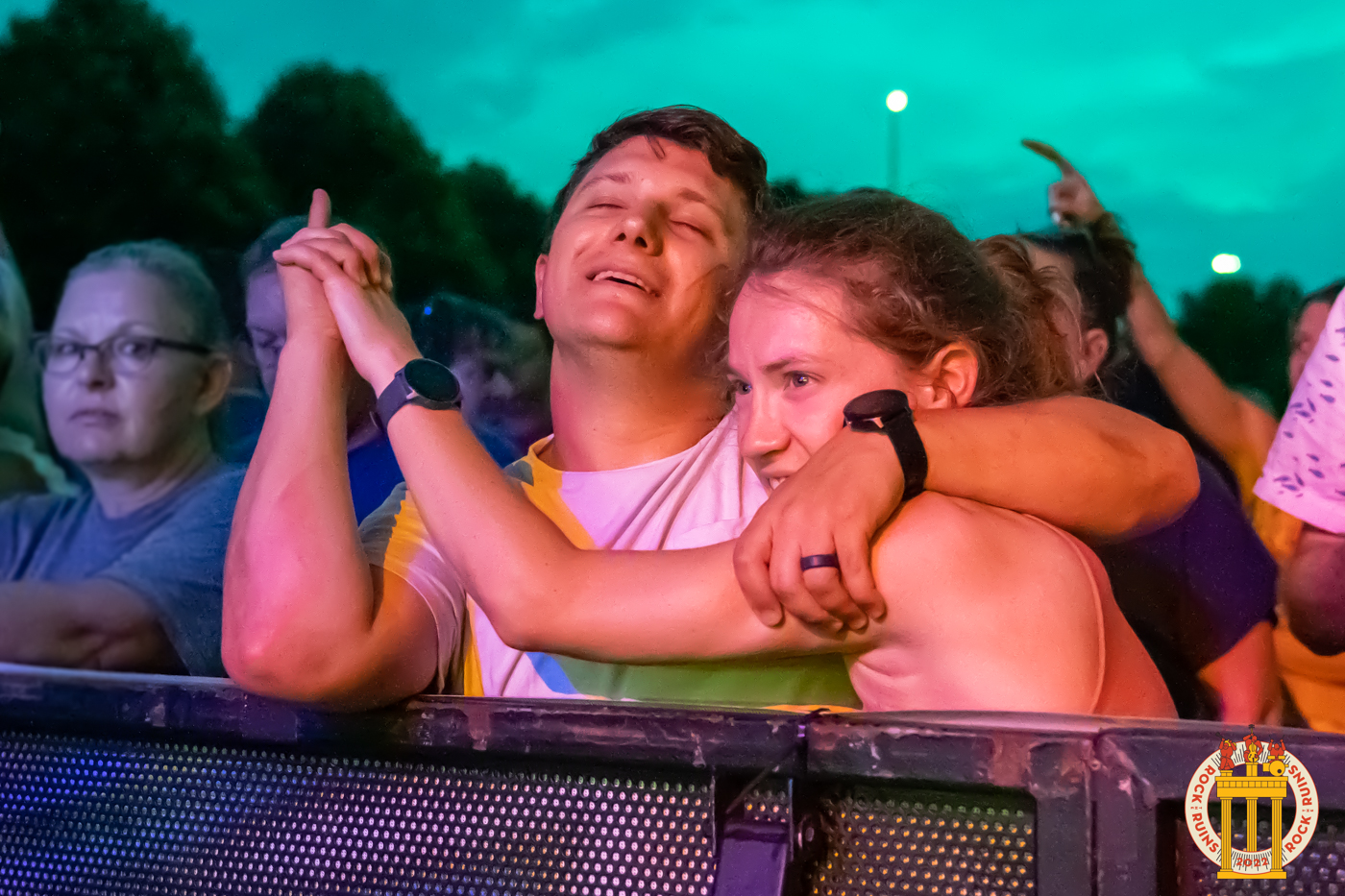 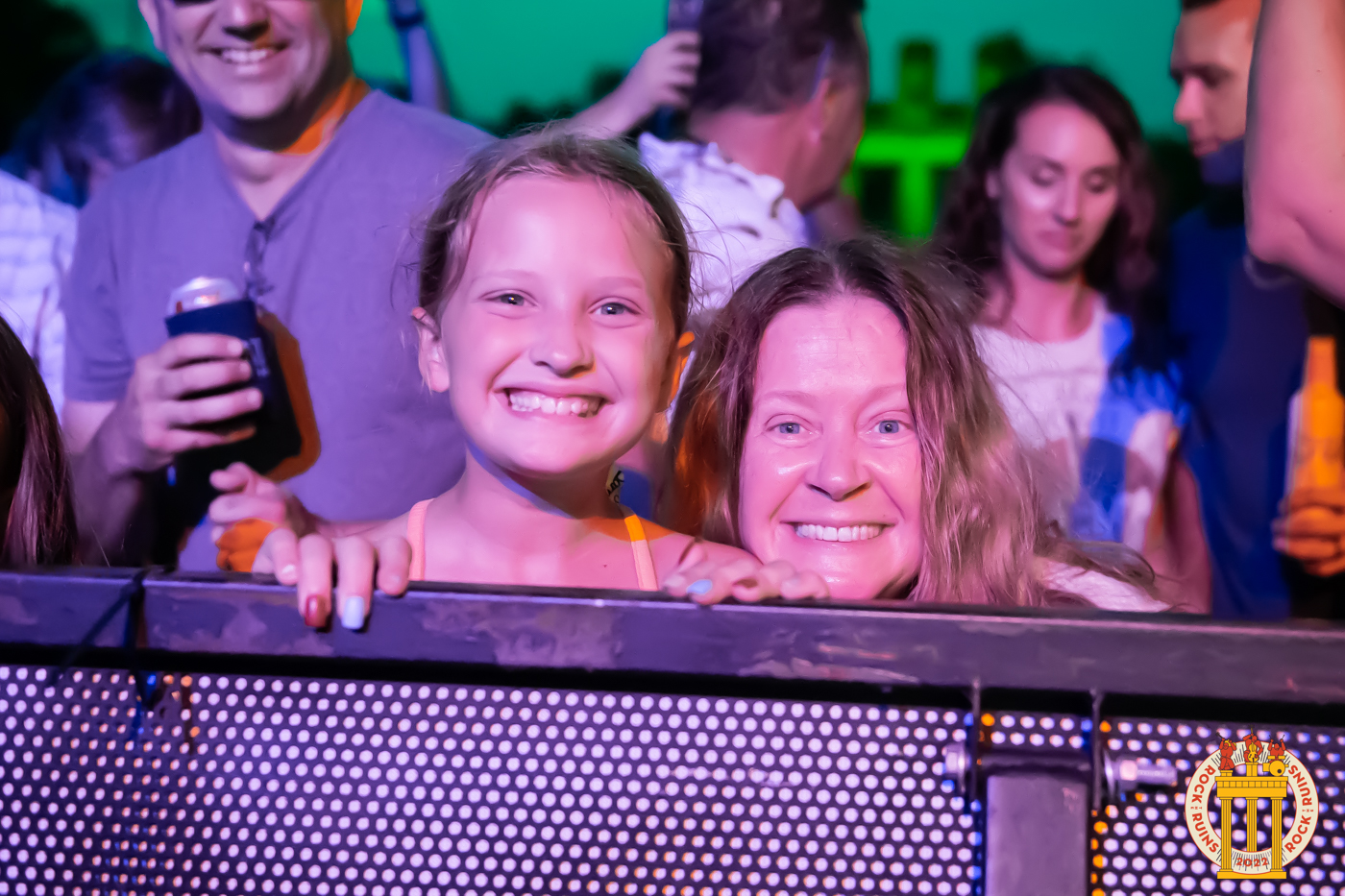 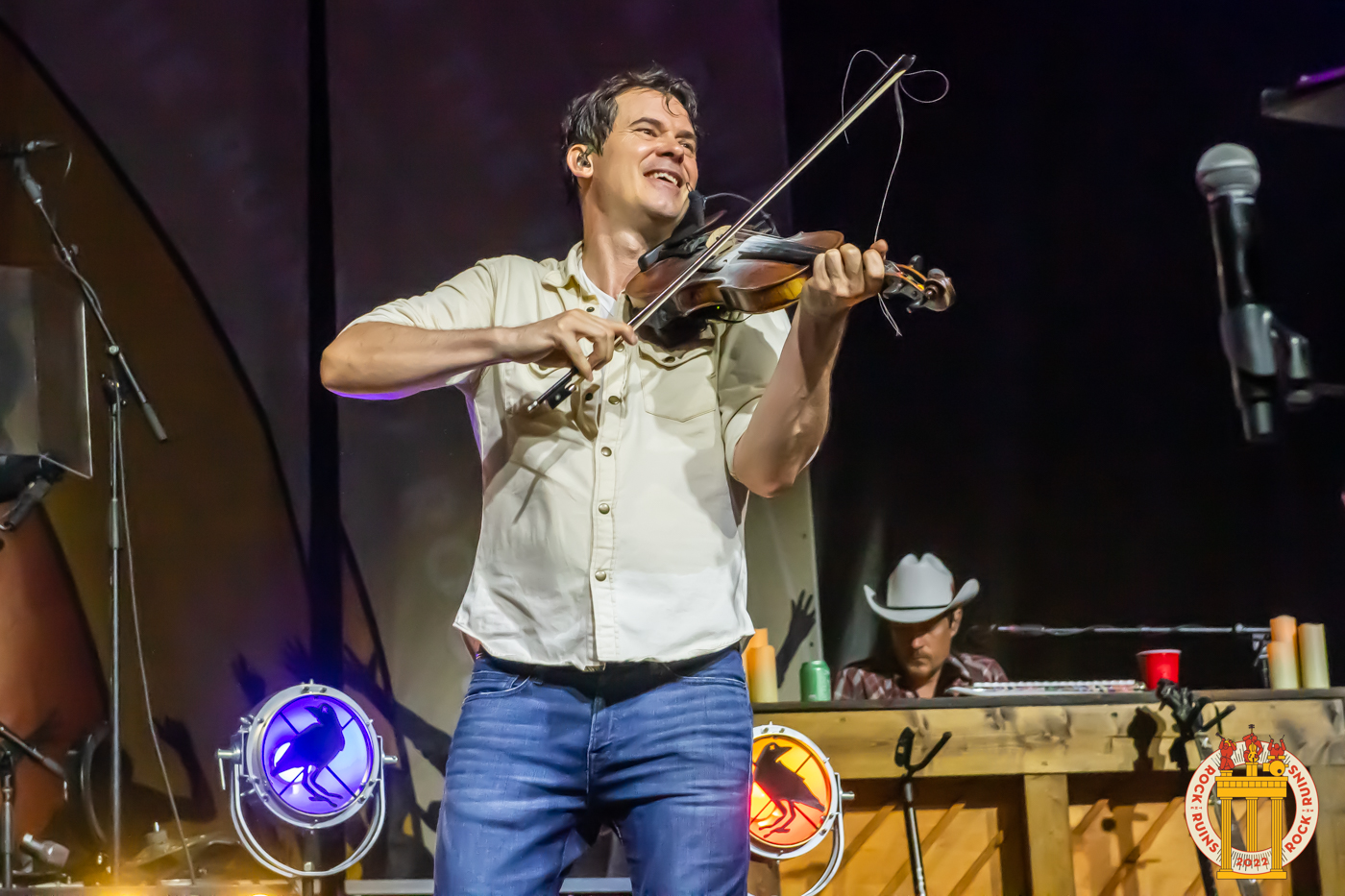 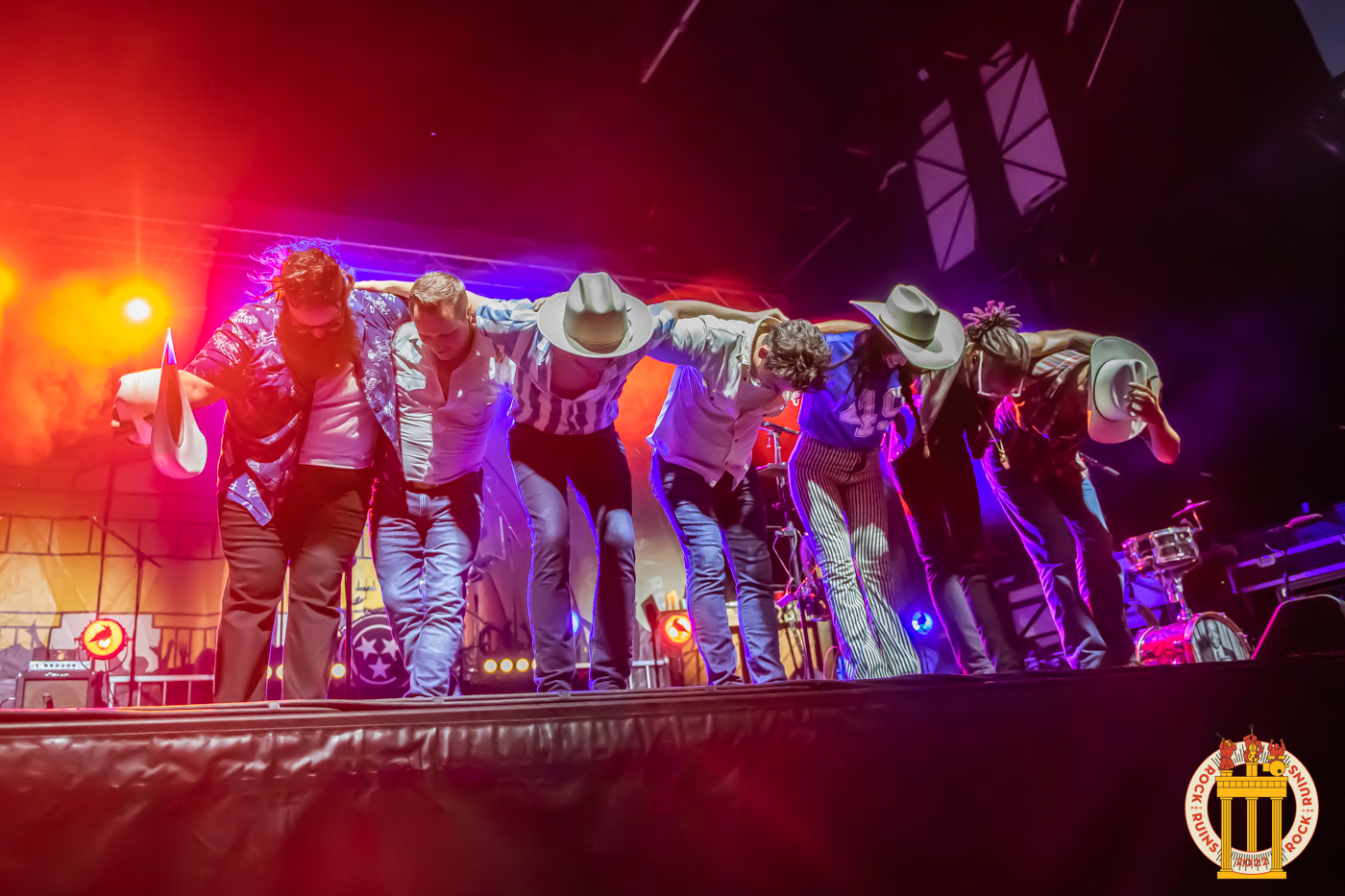 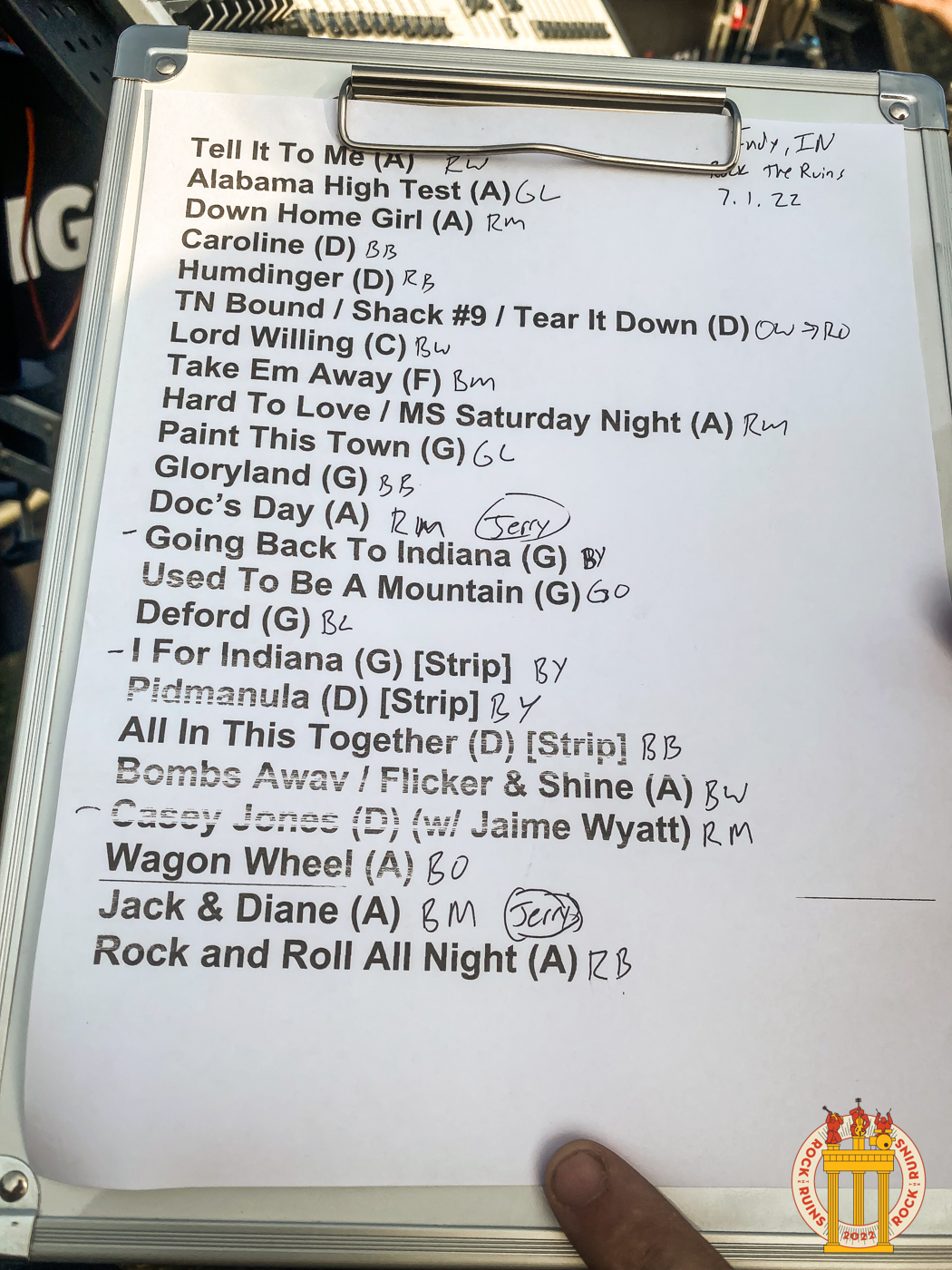 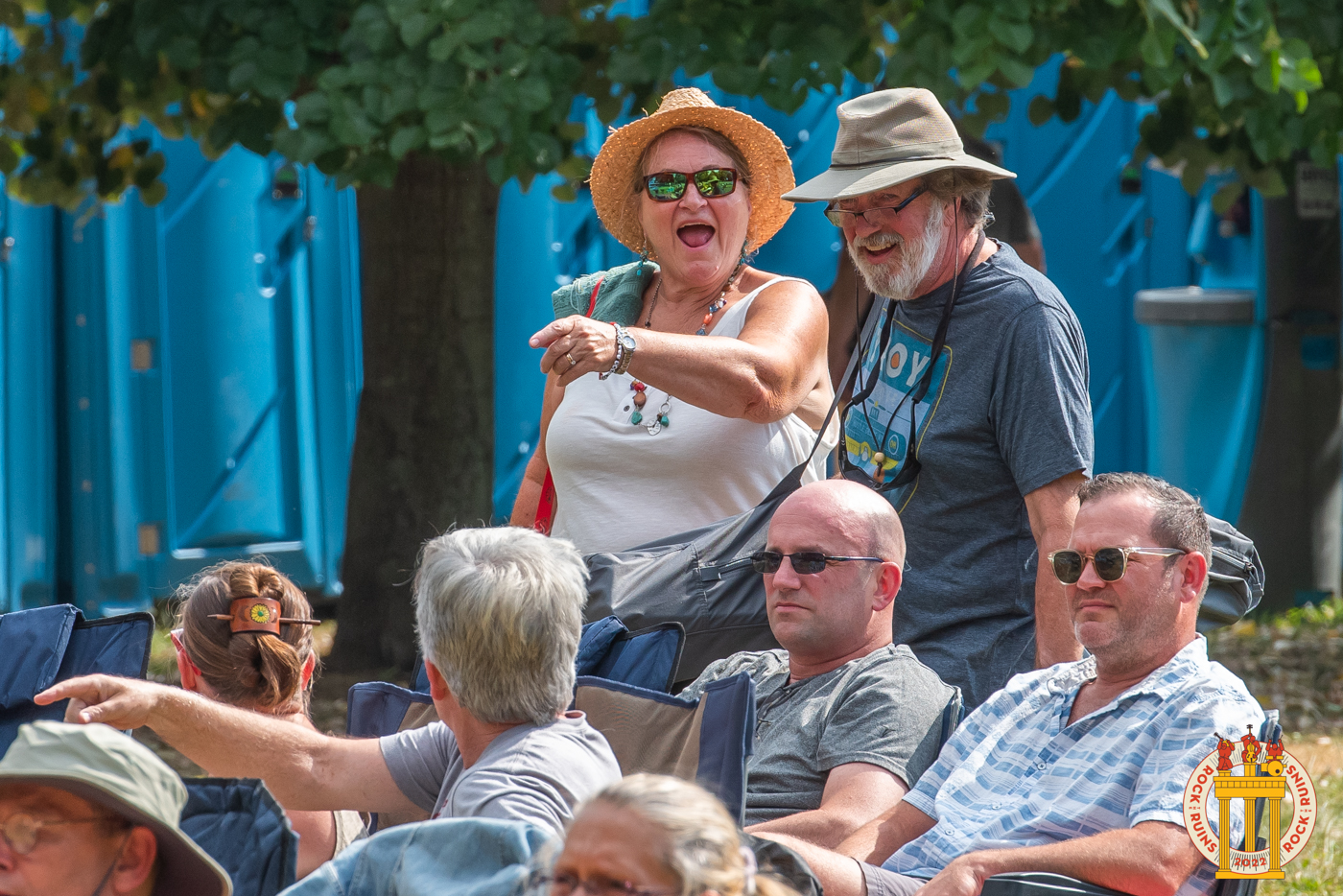 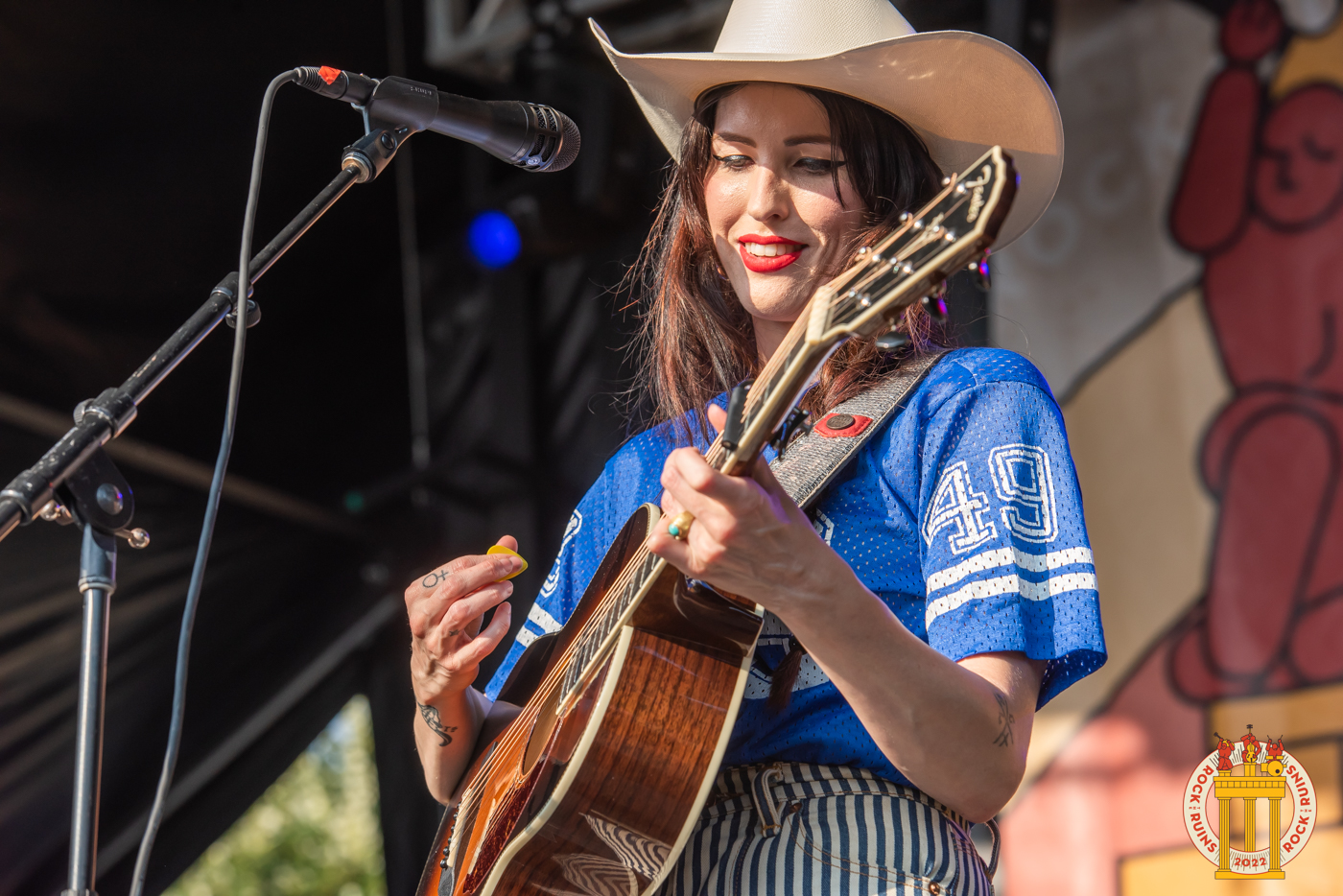 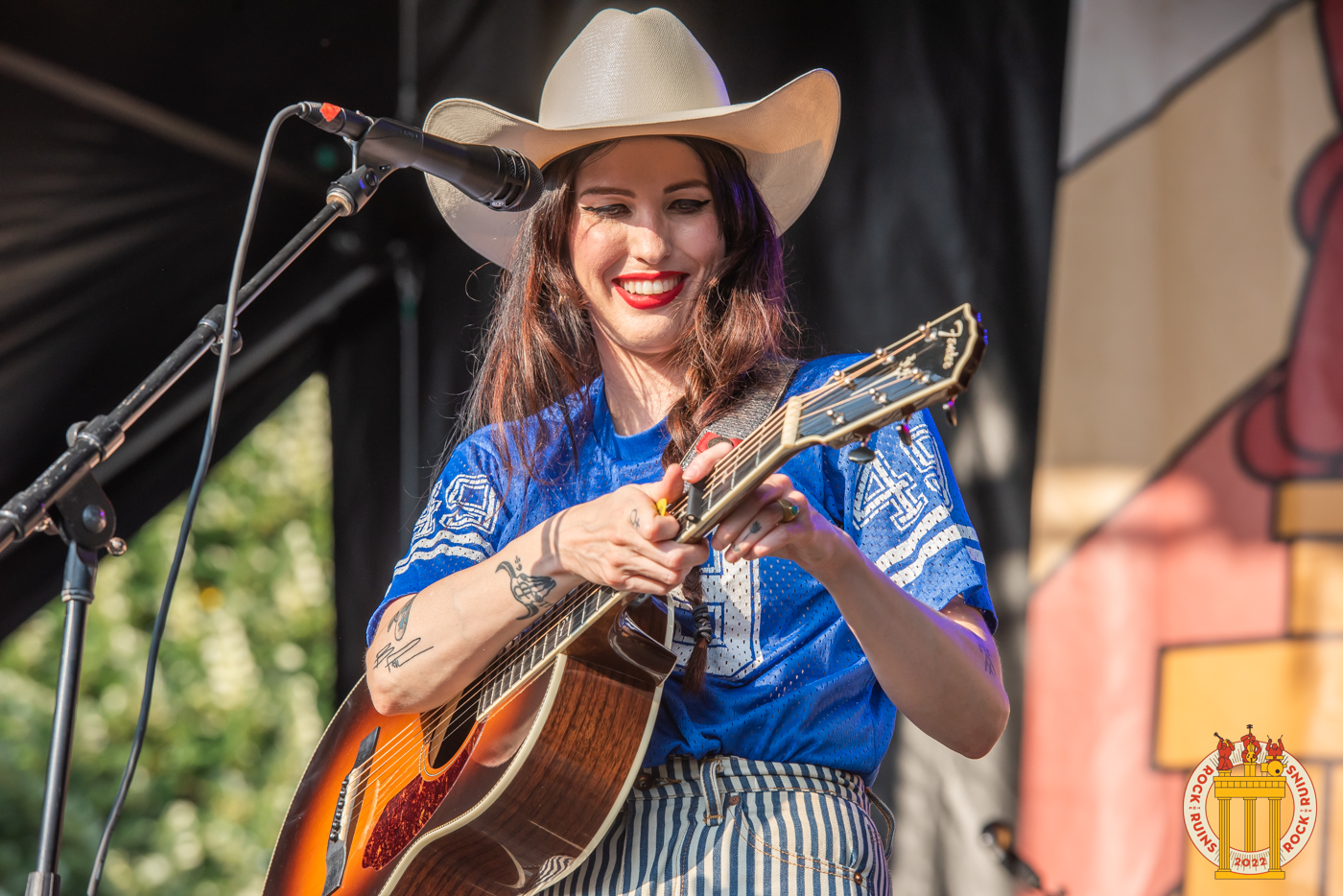 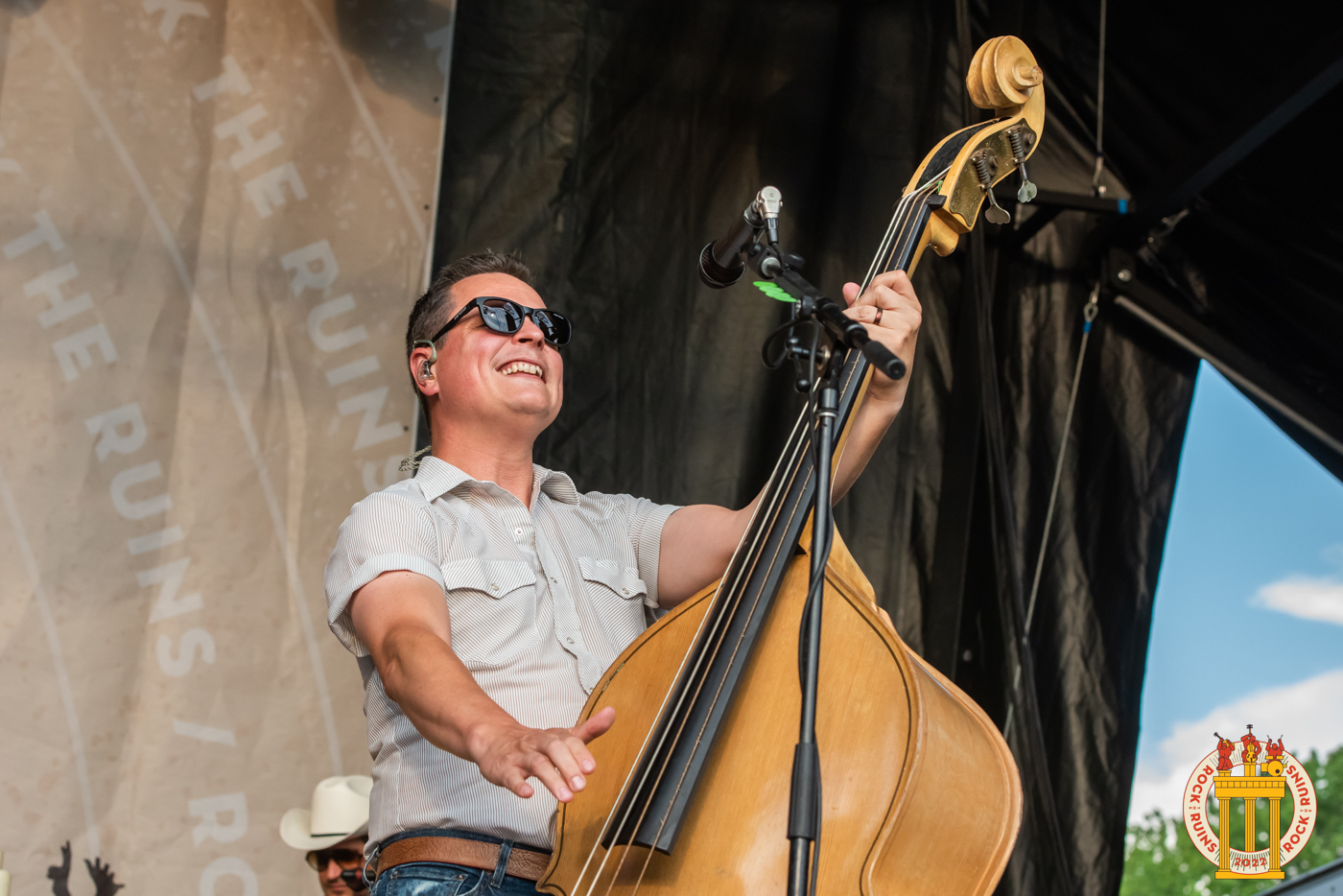 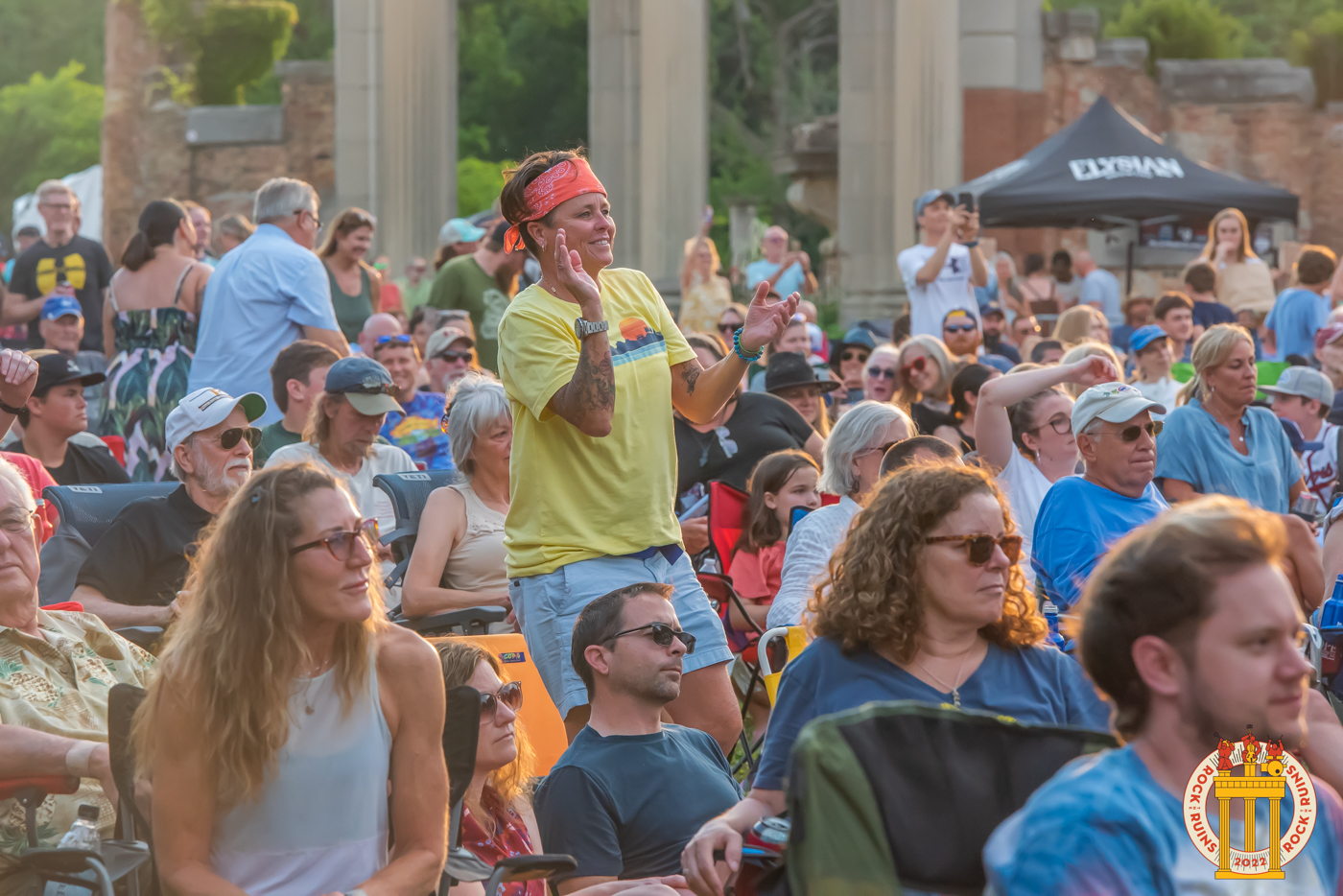 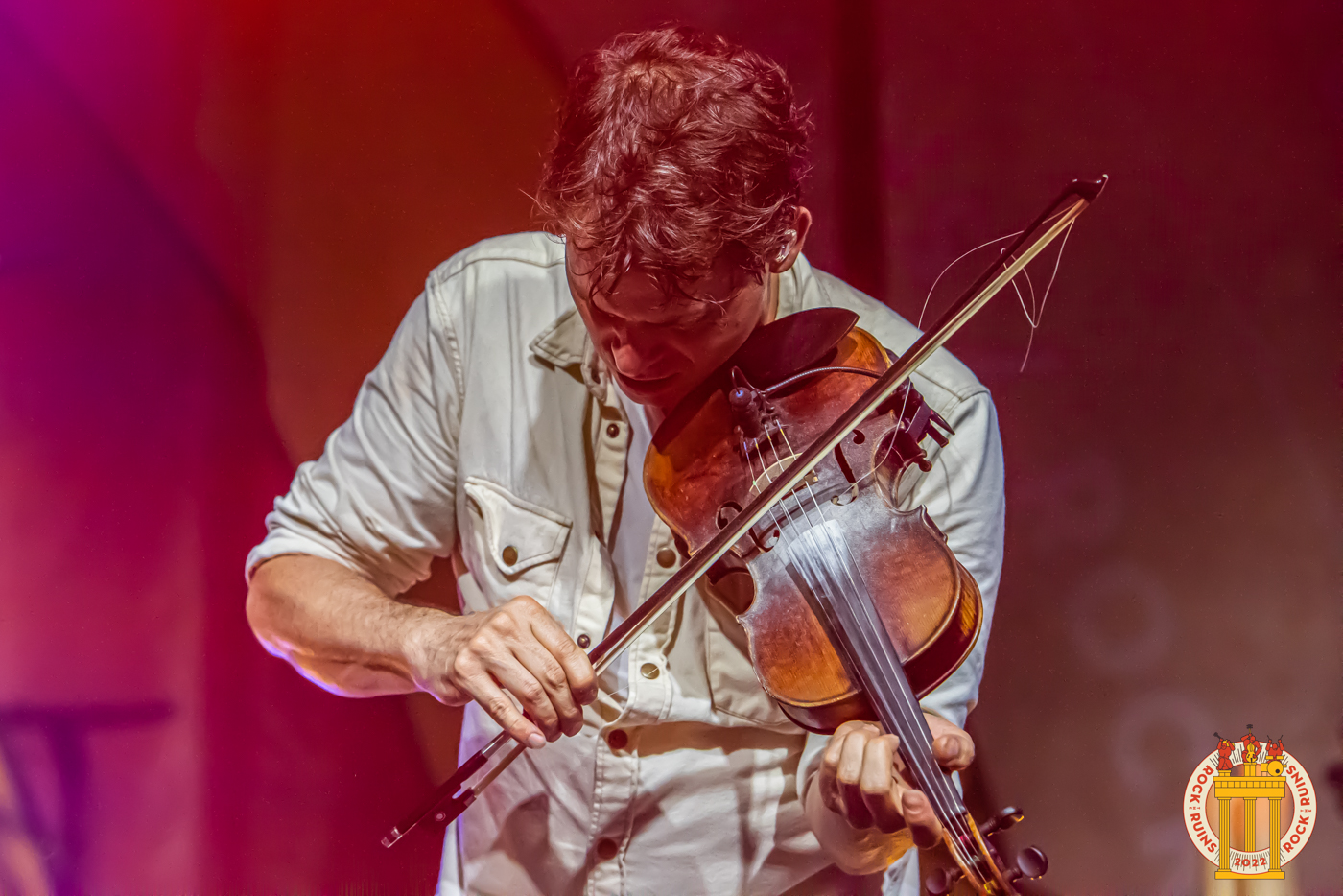 Old Crow Medicine Show got their start busking on street corners in 1998, from New York state and up through Canada, winning audiences along the way with their boundless energy and spirit. They eventually found themselves in Boone, North Carolina where they caught the attention of folk icon Doc Watson while playing in front of a pharmacy. He invited the band to play at his festival, MerleFest, and the rest is history.

It’s been over twenty years since these humble beginnings. The band has gone on to receive the honor of being inducted as members of the Grand Ole Opry and has won two Grammy Awards: “Best Folk Album” for Remedy (2014) and “Best Long Form Music Video” for Big Easy Express (2013). Additionally, their classic single, “Wagon Wheel”, received the RIAA’s Double-Platinum certification in 2019 for selling over 2,000,000 copies while the band’s debut album O.C.M.S. has been certified Gold (500,000 copies).  The band’s latest release is Live At The Ryman (2019) which was released on Columbia via The Orchard. Old Crow Medicine Show’s latest endeavor was the Hartland Hootenanny, a variety show hosted on YouTube that featured music, storytelling, special guests, socially distanced square dancing, and more.

Old Crow Medicine Show’s seventh studio album, Paint This Town, will be released via ATO Records (2022). Produced by Matt Ross-Spang, and recorded at their very own Hartland Studio, the new album shines a light on the darker aspects of the American experience with character-driven songs underpinned by the band’s vision for a more harmonious future.

If there’s one lesson to be gleaned from Neon Cross, the newest release from singer, songwriter, and guitarist Jaime Wyatt, it’s that life, in all its inherent messiness, goes on. And through it all—good times and bad, triumph and trouble, dreaming and desperation—Wyatt continues, to borrow the title of one of her new songs, just L I V I N.

To be sure, there’s a whole lot of livin’ in the 11 tracks on Neon Cross, from the whisky-soaked honky tonks outlined in the heated and hungry title track, where Wyatt, with “pitiful perfume, dark glasses, gold liquor, and alligator shoes,” plies her trade from the stage to the mountains of pain, regret, and loss baked into the slow-burning soul groove of “By Your Side,” which the artist says she wrote “after my dad died and my best friend overdosed, and I wasn’t able to show up for either of them because I was loaded,” to the stark solitude of “Sweet Mess,” where Wyatt, in the throes of a crumbling relationship, opines that “just like all the rest, I’ll be forgotten.”

“I tried not to have any filter with these songs,” Wyatt says about her open-book approach to writing. “Because I’ll be honest—it feels like I’m gonna die if I don’t tell people how I feel and who I am.” She pauses and lets out a slight laugh. “It sounds so dramatic, but that’s the truth.”

If Wyatt sounds defiant, well, there’s a reason for that. Her life story is specked with difficult—and unusual—twists and turns. She’s an immensely talented and insightful singer-songwriter who signed to her first record label as a teenager, achieving early success before losing that deal and being put through the music-industry wringer; a country music devotee who ever since has been honing her craft in bars and clubs, late night after late night and long year after long year; and a hard-luck, hard-living artist whose outlaw tales are more than mere lyrical fodder for a woe-is-me honky-tonk tune—before she was even 21, Wyatt battled a nasty drug addiction and served close to a year in L.A. county jail for robbing her heroin dealer, experiences that were chronicled on her much-lauded 2017 effort, Felony Blues.

“It’s been just this gnarly, gnarly process, but one that is so human,” Wyatt says. “So there’s been a lot of turmoil and drama. But this record is a lot about rebirth, too.” When it came to capturing that rebirth, Wyatt had some assistance from key collaborators—in particular, Shooter Jennings, who produced Neon Cross. The two have a history together—Jennings has taken Wyatt on tour, and she used some of his backing band on Felony Blues. But none of that mattered to Wyatt when it came to putting her songs in Jennings’ capable hands.

“Shooter’s my friend and, yeah, he’s Shooter Jennings,” she acknowledges. “But when it comes to the studio I don’t care who youare—I’m really, really decisive about what I want, so I’ve got to be able to work with you. And what really sold me on Shooter is that he understands grooves—he gets how to instruct a band to build a groove that is so powerful underneath a song. And it’s crazy because that’s what Waylon [Jennings, Shooter’s father] did. He always had these rad country songs with these super-weird, like funky rock ‘n’ roll grooves under them. He would take things to interesting and unexpected places. Shooter has that same instinct.”

As does Wyatt. Together, she and Jennings boldly color outside the country lines on Neon Cross, taking a wide-lens sonic and stylistic approach to the songs. Sure, there’s plenty of swaggering, tough-as-nails rock (“Goodbye Queen,” the aforementioned “Make Something Outta Me”) and classic-minded honky tonk (“L I V I N,” the pedal-steel-doused Wyatt/Jennings duet “Hurts So Bad”) to be found on the album, but the 11 tracks are also studded with all manner of sonic ear candy, from moaning, misty guitars (“Mercy”) and stately pianos (“Sweet Mess”), to spacey effects (“Make Something Outta Me”) sawing fiddles (“Demon Tied to a Chair in My Brain”) and even a Buddy Holly-style rhythm pulse on the title track.

“I have a pretty strong vision,” Wyatt says, “but Shooter would suggest some crazy rock reference on a song that I thought was clear-cut Buck Owens and somehow it would just be right. It was this real organic process of working together.”

At the end of the day, that sonic backdrop (and it’s worth noting here that much of the excellent six-string work on Neon Cross comes courtesy of the late, great Neal Casal, in one of his final studio performances before his passing in August) is all in service to Wyatt’s incisive lyrics and expressive vocals, which can be achingly sensitive and sincere one minute, and unflinchingly cocksure and dispassionate the next.

Either way, they’re never anything but wholly captivating, and maybe nowhere more so than on another duet on the record, “Just a Woman,” which sees Wyatt paired up with an outlaw forebear, Jessi Colter, for a trad-country feminist anthem on which she declares “There’s not a man in this world I would rather be.”

As for the origins of that one, Wyatt explains, “I was just living my life and having a hard time with the fact that I can’t really fully ‘bro down’ with a guy who does what I do, because, you know, his wife is gonna look at me and think it’s inappropriate. “Also,” she continues, “I’m leading a band full of young men, and I’ve been doing it for 20 years now, and I have to find a particular type of young man that’s going to listen to me and trust me and want to work for a woman. And that’s fine. It’s a deeply ingrained thing and it’s kind of odd that I do what I do. So I wanted to write a song that addressed all that without being too…”—Wyatt pauses, searching for the right word—“lame.” And, she says, “Who better to do it with than the queen of outlaw country?” Who better, indeed?

And yet, as might be expected from someone with such a turbulent backstory, even the challenges faced by Wyatt as a woman working in country music come with an extra wrinkle: Following her most recent bid at getting clean (which, as of this moment, has been successful), Wyatt confronted some hard truths about her life and past romantic relationships, which resulted in her coming out as a gay woman to family and friends.

For Wyatt, a self-described introvert, this is very much a personal issue. “I’m not, like, on the internet with flying rainbows,” she quips. But at the same time, she says, “I’m also basically coming out to the world with this record.” This is particularly evident in “Rattlesnake Girl,” where Wyatt sings, “I see my sweet friends out on the weekends, they all look happy and gay / They keep their secrets all covered in sequins, people have too much to say.” And for anyone who might have a problem with that? Well, there’s also a line in the song about what Wyatt might do with her boot heel…

Addressing the lyrics of the song, Wyatt says, “My experience with recovery made me realize I lost years of my life being in the closet and living a lie and trying to be someone else. I just can’t do it anymore. And yeah, I’m scared there are people that like country music that aren’t gonna like that I’m gay. But like I said earlier, ultimately I’m going to die if I can’t be who I am.”

And besides, Wyatt, who was born in Los Angeles, grew up “in the middle of the woods” in the Pacific Northwest, and currently resides in Nashville, has never been overly concerned with fitting in anyway. “I mean, honestly, I don’t feel like I fit in anywhere,” she says. “But that’s fine—I wouldn’t want to get too comfortable. Because as an artist, being unique is my greatest asset. So if I were to fall into a scene, I probably wouldn’t push myself to really make something that is captivating.”

With Neon Cross, Wyatt has indeed made something captivating—and also incredibly unique. Which isn’t as easy as it might seem. “It’s like John Lennon said—there’s nothing you can sing that can’t be sung,” Wyatt surmises. “But hopefully you can at least put a new spin on it.”

At the end of the day, she continues, “that’s all I’m trying to do. I’m just a songwriter, and I spend a good portion of my life in barrooms performing and worshipping country music and rock ‘n’ roll and telling my story. And I do it because I believe in the power of music, and I believe that music has saved my life in so many ways,” Wyatt says. “And that belief is a powerful thing.”